“O where shall I find a virtuous woman, for her price is above rubies.” Proverbs 31:10

I knew The Prime of Miss Jean Brodie by Muriel Spark would be trouble when a writer wrote a hilarious text that read, “I want to claw my eyes out.” 😂 🤣 😂

True, it is extraordinarily hard to connect with this book and yet, if one can place this dark satire in the proper context, the story is chillingly familiar. First and foremost, Miss Jean Brodie was an early groomer of children.

Target a child’s vulnerabilities: ✓ Brodie digs right in on each girl’s desire to belong, be seen, be special.

Gain a child’s trust & that of their primary caregiver: ✓ Brodie picks the ones she wants (making them believe they are unique), and the parents consider her of value.

Fill a need in a child’s life: ✓ Brodie treats the girls like adults, and sets their destiny which provides security amidst the chaos of childhood.

Isolate the victim:  ✓ They are part of a set, no others allowed, and disallowed from forming other connections.

Maintain control through fear and by invoking sympathy: ✓ Brodie enlists their support against the head mistress.

~ Thanks to Leslie in SI

Miss Jean Brodie became something of cult heroine to our mothers in the 60’s, a feminist-role model with the British actress Maggie Smith leading the charge as the star who portrayed Brodie in films and TV series. But the underlying truth of who Brodie was, as drawn by Sparks, was a that of a self appointed Messiah who got one girl killed and two more groomed into sexual service. Such was the prime of Miss Jean Brodie. How frightening that our mothers did not read more closely, or think more deeply, about what Sparks was trying to tell them in the lines of her book. No doubt this was largely due to the fact that they were more likely exposed to the story through the film and TV adaptation which portrayed Jean Brodie all together differently than Sparks did in her work of literature. How sad too, as the plague of sexual abuse continued to run rampant through the 60’s and to the current day. Such violence against women is one of the greatest crimes against humanity because to sexually assault a young girl, or child, is to shatter the psyche and steal the future in an instant. That this particular crime rarely comes to justice or even recognition (anyone curious where the “Me Too” went?) means that it is also one of the great dark shadows of our time and holds hands with other unhealed shadows like slavery and the annihilation of the Native peoples.

What of The Prime of Miss Brodie, which was considered Spark’s very best novel in a career of twenty such books and that The New York Times, in typical clueless fashion, called “a fizzy, funny classic 1962 novel”? 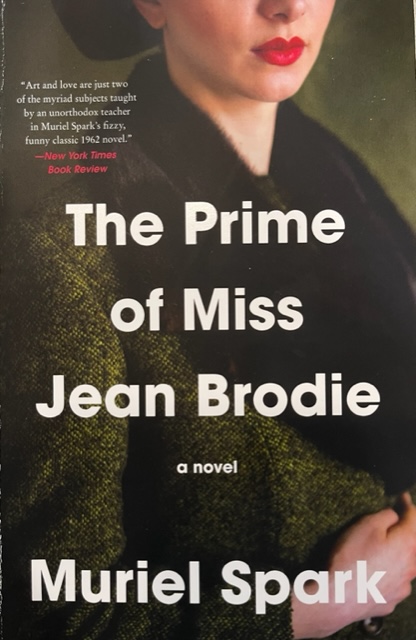 Reactions First: At Blackbird, we have four long term studio’s where writers work with a small cohort in literature and craft study and in workshopping of pages. Each studio weighed in as follows:

SI: Difficult to take on because it was a book my mother loved, the character of Brodie was a big hero.

Falling into the story…whiplash feeling as it moves along.

Absurdity makes it more accessible (not taking it as seriously).

Disturbing. The tone confusing. What’s going on? Continued throughout…

Not understanding that it was satire, I found myself put off by Miss Brodie’s damaging narcissism.

“One must learn to cultivate an expression of composure”=”Pull yourself up by your bootstraps.”

SII:  My mom loved this book; related to the teacher aspect; aggravation; amusement.

A delightful voice, an intriguing and complex character; enjoy the flitting from past to present and back.

Grooming young girls to be the crème de la crème: What did that actually mean??

Loved the precision with the hats and uniforms.

Admired the writers skill but so dated it is hard to get invested now.

The girls talking about pregnancy and sex was just insane!

Didn’t much like any of the characters; had trouble staying awake.

I felt unmoored, disconnected from any particular character or core desire.

Had a hard time getting invested, didn’t like any of the characters or want to root for them

Reminded me a Madam with her “girls.”

I felt like I’ve met all these characters in my life; liked the flippancy of the storytelling and characters.

Liked the spunk of the protagonists; this can and does happen now.

Reminded me of a teacher I once had. Didn’t like Brodie at all.

Loving it; flippant; the going forward and back in time; neat construction.

Loved the satirical nature of it, particularly calling the one girl stupid over and over again.

Onto the Teaching: Above, we get the reactions out of the way in order to validate the experience. Your reaction is your reaction. Good. Now, let’s think a little more deeply. We did this by breaking out the inner and outer arc.

INNER ARC: How does a woman like Brodie exist? Under what conditions? And how does she remain in power for so long? This is first answered by the fact that Miss Broadie takes hold of these girls as children. “Give me a girl at the age of seven I will have her for life,” she says to her “set” at one point. A second answer is offered when Chapter Three announces to the reader: There were legions of her kind during the nineteen-thirties, women from the age of thirty upward, who crowded their war bereaved spinsterhood with voyages of discovery into new ideas and energetic practices in art or social welfare, education or religion…the vigorous daughters of dead or enfeebled merchants, of ministers of religion, University professors, doctors, big warehouse owners of the past, or the owners of fisheries who had endowed these daughters with shrewd wits, high colored cheeks, constitutions like horses, logical educations, hearty spirits, and private means. Apparently, women like Miss Jean Broadie were not rare.

STRUCTURE: This chart is one I created through a page study, but it was not as careful as one created by Becky in SIII. 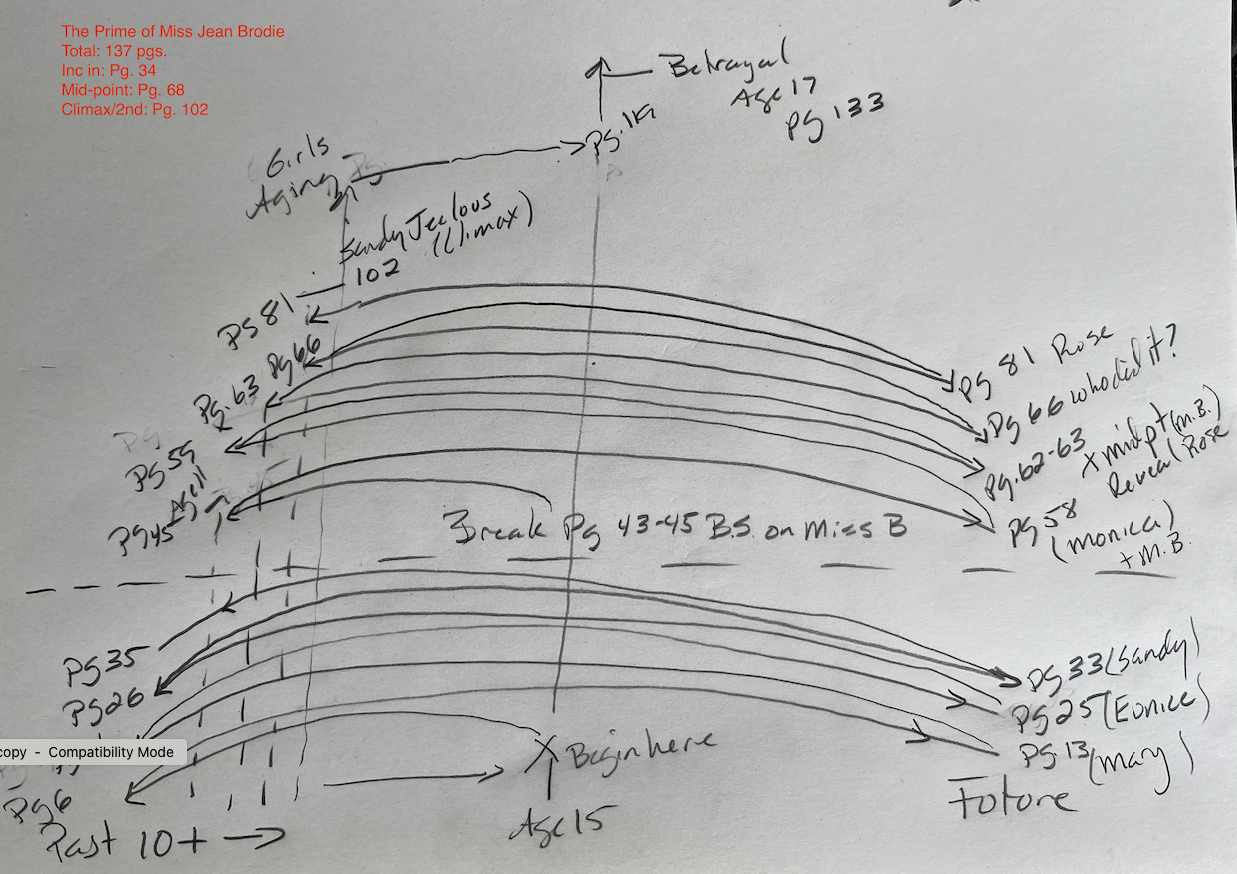 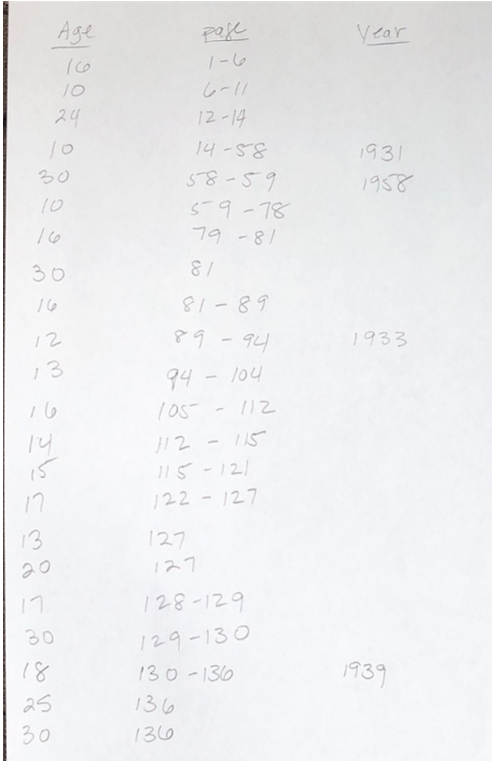 Becky has gone through page by page and ordered by dates/ages which makes her study far more exact than my own. I had the girls starting at age fifteen, she has them at sixteen. Becky then went on to create two structure models: one that looks a bit like a pair of lungs; the other, a pendulum model like the one I constructed above but reversed and unpacked to show the ages ages of the girls. 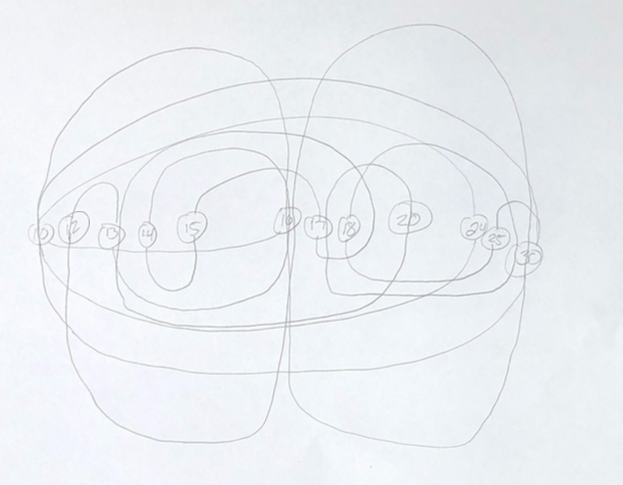 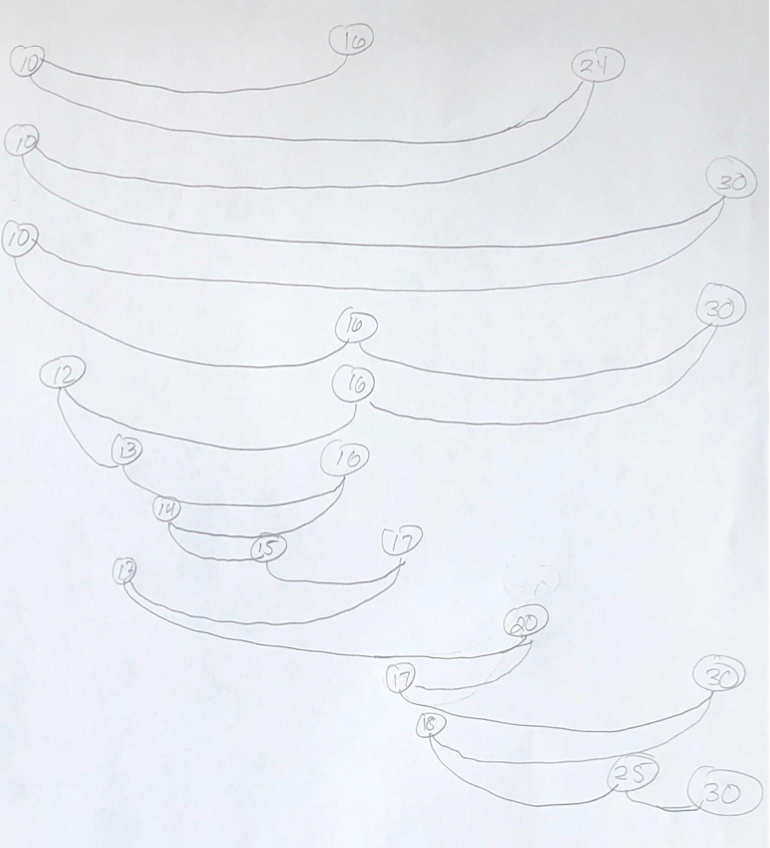 This exercise of drawing out the underlying and observable structure of a full length work is incredibly valuable for writers with the time (and interest) to apply themselves in this way. While it is extraordinarily difficult, and not recommended to create in this manner, what a writer can do after the first or second draft once “it’s all out” is tune their vision to the observation of patterns in the draft. A pattern WILL be there, just as there are patterns in all forms and shapes and creations. What we lack, too often, is the eye to see them. If a writer can cultivate this seeing though, they are well on their way. As Jane Smiley tells us in 13 Ways of Looking at the Novel, she creates these kinds of drawings, charts, cards for herself in order to better see her work. And each of her novels was different too, she wrote. I’d suggest every seeing eye is different too, as was the case here with my structure drawing and Becky’s. Neither is suppose to be right or wrong. Black and white thinking has no place in the shaping of art. The point is to look, and draw what you see.

Spark managed a viable structure that follows the classic model of inciting incident/first plot point, midpoint, and finally a climactic moment that takes the reader to the end of the story. All occur in the near exact spots (see top chart, top left pg. #’s in red). Sandy was the protagonist who fell under the spell of Brodie. But she fell more under the spell of her desire to be the star of the show~any show would do. That began then with Sandy (with her pig eyes) placing herself in the center of dramas where she was the heroine (the story she wrote with Jenny, the Alan Breck story, the Pavlova fantasy, the policewoman drama). It ended with her interjecting herself to become the lover of Teddy Lloyd (Brodie’s rejected love). Sandy became obsessed and even infuriated that Lloyd painted her head on the body of Jean Brodie, as well of Rose (another of the Brodie set) who had been groomed by Brodie to become Lloyd’s love. Despite Rose being the preferred choice, Sandy inserted herself out of jealousy, and when she could not be satisfied, betrayed Miss Brodie by giving away her politics to the head mistress.

PLOT: As with The God of Small Things, this is a tragedy. Sandy is the monster of the story, and her betrayal of Miss Brodie results in a restoration of peace to the community meaning Brodie is fired and no longer in the business of grooming young girls. 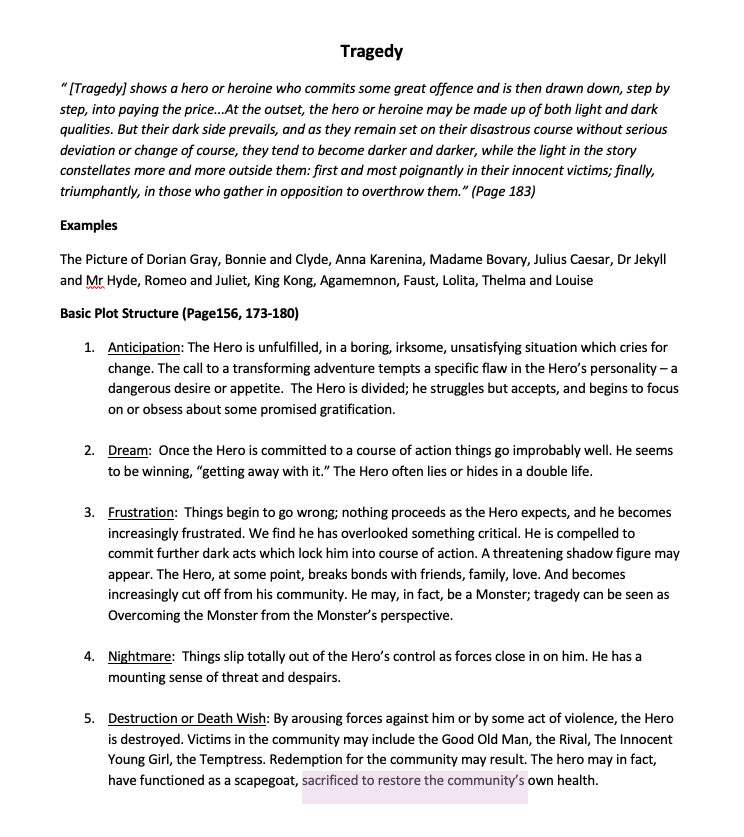 Finally, this from Ciel in SI who makes an important point and asks a good question: Calvinism runs as an undercurrent through the story. Calvinists were the only ones to subscribe wholly to predetermination; believing your destiny is already laid out. God has already decided before you came to into being. Miss Brodie deciding what each girl will be, is much like the God of predetermination. In more than one place, it says Miss Brodie is God/has godlike powers; makes reference to “Leading her flock” etc. So when Sandy betrays Miss Brodie and enters the church, is that mimicking the Judas betrayal? Or Sandy’s atonement for betraying “God”?

And then from Cevia (who edited this post): One thought that I had was about Sandy, the monster/anti-hero who “saves” the community by getting rid of Miss Brodie. How do we account for the fact that her motivation was not to save the community but fueled by jealousy and perhaps the desire to be Miss Brodie, to be the messiah? What role does intention have in all of this? Can a community be truly saved in such a case and what residual effects does this have? Do “the ends justify the means”?

What do you think? Let us know…