Lit Lesson #12: Is Moral Transformation in Story a “Radical” Notion? We’ve wrapped two weeks of study on the Tolstoy short story, Master and Man, which came to us from the collection of Russian stories contained in A Swim in the Pond in the Rain by G. Saunders. And this is the last story we’ll be studying too. It was a doozy…

Master and Man by Leo Tolstoy

I read Master and Man and did so multiple times. And, I respected those in the classes who just didn’t get into it, or care. Fair enough. Read what lights you up. Leave the rest.

As for me, M&M introduced me to my interior Vasili (the one adding up the costs of things and deluding himself) and the exterior Vasili that is our advertising culture and people saying one thing and doing another, or even justifying actions that are not what they appear. And, the death of the loyal horse Mukhorty, which left me weepy. Why did that have to happen? Why did Tolstoy have to kill that poor horse who was nothing but loyal and steadfast? I asked myself again and again, until I finally figure it out too. Which was, I have to admit, a bit of a high.

This is a story of a man obsessed with wealth, attainment, and competition for the sake of competition. He is going to get himself, and his servant, and the horse killed because of these qualities. This man, Vasili Andreevich, starts out going to buy land,  determined to get the best price in order to increase his own wealth. With his servant Nikita, Vasili sets out near the end of the day. As a storm is coming on. In the winter.

You don’t have to be a rocket scientist to realize this is bad. And it is.

…we define escalation as that which results when we refuse to repeat beats…a “refusal to repeat”…”Always be escalating,” then, can be understood as “Be alert, always, to the possibilities you have created for variation.” If an element recurs, the second appearance is an opportunity for variation and, potentially, escalation.

Yeah. I don’t have more to say about it than that. Ponder the teaching a bit and we’ll hit this in your workshop. You know what he’s talking about or you don’t and I’m there to keep hammering this home.

This has to do with the hero, also called the protagonist, flipping from who they were at the beginning of the story and who they continue to be until events force a shift at the climatic moment (or just prior which is also called the lull), and then who they change into being as a result of those qualities and the passing of time. Effective transformation comes from the descriptions of the protagonist and from the progression of scenes moving through time. From events narrowing the possibilities. The outer arc of this story is Vasili’s myopic focus on buying that land—despite the storm, the lack of light, and how he repeatedly gets lost. No matter what, Vasili will forge on….”Lose an hour and you can’t catch it up in a year,” Vasili says at one point when being urged to lodge for the night.

So, the inner arc, or that portion of the story that Grace Paley reminds us is always “bubbling beneath,” is about how Vasili will deal with events when facing death.

What happens is that Vasili, who once felt superior to his servant, Nikita, experiences what appears to be a partial spiritual awakening, meaning his sense of identity expands to include Nikita who he saves. Vasili also realizes his own weakness at being a guy who initially left Nikita to die (as he did before Mukhorty led him back to the sled). But then, when Vasili is in the midst of saving Nikita, his transformation stops short. As he’s lying on top of Nikita and giving him the warmth of his own body, he is back to his myopia of self-aggrandizing, which is why the horse had to die. Mukhorty, the creature that in effect brought Vasili to his transformation, or at least partial transformation, is killed by stupidity, by his failure to fully awaken. Vasili doesn’t save the poor horse, or even give the animal a chance to safe itself. Instead, Vasili tethered Mukhorty to the sled but didn’t cover the animal. And he knows it…

“He looked out several times at Mukhorty and could see that his back was uncovered and the drugget and breeching lying in the snow, and that he ought to get up and cover him, but he could not bring himself to leave Nikita and disturb even for a moment the joyous condition he was in.” ~ From Master and Man.

Saunders, in his commentary, suggests that Tolstoy is proposing something radical in this story— moral transformation—via action in the “replacement of his (Vasili’s) habitual energy with some pure new energy.”

To a degree, I get what is being said here. We, as writers, take what was is the core of the character and adjust it toward the higher “value” as Robert McKee calls it in Story. But is that a new idea? Ground breaking? Radical? 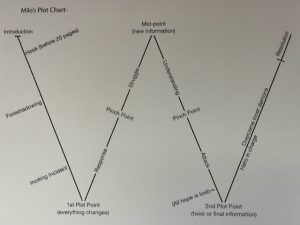 The W Chart from Bones!

And let’s back up another step. Isn’t the “moment of change” for the hero always via action. (These are what we call “proofs” after the lull). And isn’t this change always born from all the qualities already laid out in the story? I mean, isn’t that what we’ve been talking about with all this analysis of movies and books? Thelma’s pulling the gun on the cop and talking him, sweetly, into getting into the trunk…Homer pulling out the bag Larch sent him because he realizes he is now in “the doctoring” business…Harold passing the manuscript to Karen and saying, “Finish your book. I love it,” though he knows he will be dying? (Thelma and Louise, The Cider House Rules, Stranger than Fiction, all used to demonstrate the point in Bones of Storytelling) These are all actions. (So, hold on. What am I missing? We know this, right? We’ve studied this, right? We are studying it right now, right?

Yes. Yes. And yes. So, that is a hearty source of reassurance. Blackbird, as I promised, is an MFA-level teaching without the MFA price tag.

And now, let me go back to that “radical” part of the conversation because I have another question…isn’t all story about moral transformation, which either happens or not? Look at plot. Other the Voyage and Return, every plot referenced in Booker’s The Seven Basic Plots: Why We Tell Stories goes to moral transformation (again, that “value” McKee writes about). And again, look at structure. It’s there too.

Perhaps Saunders is culling his notions about moral transformation being radical because he hasn’t seen this is in the great stories of our time, or because he’s part of a culture of literature that largely feeds on cynicism? I’m not sure, but I do know that teachers do not have all the answers and that we most often teach what we are trying to learn so, I wish him well on his quest to discover moral transformation and storytelling go together like birds and nests, like the sky and clouds, like peanut butter with jam.

And, in the Seven Basic Plots, Christopher Booker laments the current languishing of story in the realm of the egoic and how the last two hundred years of storytelling showcase little more than sentimental tripe designed to, quite literally, numb the masses. Robert McKee reminds us of the same, adding that our lives are in a state of moral bankruptcy and that yes, in much of our storytelling that lapses into cliche. These teachers give me heart, and there are many more of them out there too. Thank goodness.

So, okay, Saunders seems not to get this and I suppose it’s natural enough to think…”Wow! This is radical. This moral transformation.” But I’d like to humbly offer that Tolstoy gave that which story is born to be and did his good work within this story by walking in true alignment with structure (as any student of Film Studies:101 would agree). The All Hope is Lost moment is when the protagonist (Vasili) and the antagonist (his sense of identity and selfish egoism) face off. And, of course, because death will be taking Vasili very soon whether he changes or not, a higher, better, less egoic Vasili appears from the one already in existence. He is himself but better because, under it all, he, like me, like you is divine incarnate which means Vasili, like all of us, is a divine soul, right? In a sense, a manifestation of God in the material world. Tolstoy was a spiritual man (in thought if not always in deed). So, he wrote Vasili true. Vasili has no choice but to shed a layer or two. One would hope. And yet, the brilliance here is how Tolstoy has Vasili fall short by allowing the tentacles of the omnipresent ego to doom the horse. And in this, we see ourselves then. We see ourselves falling short again, and again.

That’s human and we are forgiven.

“Come, come, whoever you are. Wanderer, worshiper, lover of leaving. It doesn’t matter. Ours is not a caravan of despair. Come, even if you have broken your vows a thousand times. Come, yet again, come , come.

Tolstoy isn’t the only guy out there who knows how to write a killer story with that natural moral transformation that the best stories offer. You’ll find this in the Book of Job, the classic “go the distance” story. And the three tomes of Oedipus Rex (but you have to read all three). The Nickel Boys goes there, as did The Underground Railroad…both by Colson Whitehead, and There, There by Tommy Orange. And Eleanor Oliphant is Completely Fine by Gail Honeyman. And An American Marriage by Tayari Jones goes the distance as a tragedy. We’ve seen them. We’ve discussed them. And we are on the hunt for the eighth plot that goes beyond Rebirth, too. It’s out there. I’m sure of it. We nudged against this with our discussion of chiasm earlier in the year. Keep looking, and sharing, and I’ll keep teaching from these stories (as well as the ones that fall short).