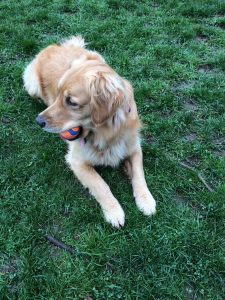 Luna and I, in the park this morning. Her after squirrels, the elusive foe, and me listening to a short by Eudora Welty. Where is this Voice Coming From?, was written after the shooting of civil rights activist, Medgar Evers. Welty’s story ran in The New Yorker a month later, and is from the point of view of the white supremacist who shot Evers.

This particular story, written and published six months before my own birth, is very timely in the scheme of my teachings at the Blackbird Studio. As Studio I members know, from the discussion we had in class yesterday (about Junot Diaz), I find myself troubled and disillusioned by the reports of Diaz’s misogynistic behavior toward women, and second by the fact that The New Yorker provided a platform for his pre-emptive confession (in the shadow of Sherman Alexie’s public exposure for similar acts). While I don’t know the specifics, I’m pretty sure the TNY paid him thousands of dollar for a story that excluded huge swathes of the truth about his behavior. What is more of a betrayal then? The Diaz article that doesn’t go the distance? Or the The New Yorker who failed to fact check that article?

Home from my walk, feeding the dog, making coffee, and prepping myself to put in my own 1500 word day, I am drawn to write about this whole thing as I think it all through. Am I outraged, as a woman, who has been raped and tortured as a child? Yes. Of course. Does it bother me, excessively, that Diaz pins his bad behavior on his own early abuse? Also yes. I have the same history but have not hurt anyone and then offered up my own history of abuse as my reason. Someone in class said it’s all playing out this way, “Because he’s a man,” and men, even men of color, have more immediate credibility than women. Does that make me angry? Hell yes!

Most of all, I find myself wondering what am I doing in my own work if I know that someone like Diaz won’t be fact checked, and that he will be paid buckets of money for a partial confession. What happened to the scourging that took place with James Frey, a la Oprah? Where is that outraged demand for truth and honesty now? Why isn’t OW yanking The New Yorker on the stage and demanding accountability? When I push each of you (and myself), to the deepest level of interior truth in order that our work reads purely, is that effort for naught? Does truth even matter if you are someone who can “get away with it?” Is this what is becoming of us now? As a people?

Back to the story of Medgar Evers. In 1963, Evers was 38 years old, a WWII veteran, a college graduate, a family man, a field secretary for the NAACP in Mississippi. Evers worked diligently to bring rights to black people: Voting rights, rights to equal access, and rights to economic opportunity. He was pushing 250 years of slavery and a brutal, ignorant system overpopulated by whites who believed it their God given right to enslave men and women and children. Evers was gunned down in the driveway of his home by Byron De La Beckwith, a white supremacist. Beckwith shot Evers in the back with a rifle. Welty’s remarkable, and courageous story, enters the very mind of the Beckwith (though she did not know him, she felt sure she did too, and later it seemed she was correct and aspects of her story had to be changed). Her job then was to watch what happened in her world, but also listen to her interior world, and then, when the storyteller voice rang out, to write. That’s all.

In listening to Where is this Voice Coming From? and the commentary by Joyce Carol Oates (who read it and discussed with with Debra Treisman, fiction editor of The New Yorker), Oates helped me realized something true. She said, “Writers are drawn to drama. It’s not a sense of political correctness or incorrectness or being nice or being nasty but somehow illuminating the human experience which is often dramatic and often very cruel.”

The human experience is often dramatic and often very cruel.

That’s what Welty was about in her time and what we are about in ours. I can talk about the absolute necessity of stories like Welty’s, and how they continue to hold truth all these years later, and I can point to the civil rights movement as a precursor for the #metoo movement that exposes injustices against women, and all that is important too. But most of all, I want to reinforce what I am doing as a teacher. I am making space at the Studio for writers to pay attention to the world outwardly, to listen to inwardly, to see where these tides collide, and then to write, write, write until you are able to create something you will then contribute to the world.

Who cares, in the end, about the politics of story and what favoritism Diaz gets from The New Yorker? Who cares if they do or don’t fact check him or find him worthy of supporting (while thousands of other writers go unnoticed and will never have such privilege)? Who cares if Diaz knowingly withheld huge swaths of truth from his work or if he did so without awareness?

None of these are the point of what we are doing together. We study and write about the human experience. We strive to do so honestly. And so, that’s what I’m going to do now. See you in class.