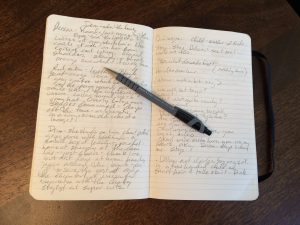 By now you’ve had several weeks to practice this hinky little exercise that shows you just how invasive your mind is when it comes to seeing people and places, and hearing what other people have to say. I know it’s hard not to interpret, judge, evaluate, interject, explain, and basically impose your thoughts on the experience but remember, the job is to be a pure witness. Writing without metaphor or simile isn’t the goal, but having a sense of how you are seeing in order to build in metaphor or simile that is actually growing the image is the goal.  We’ll be working on this next year.

My huge thanks to Tad, Glenda, and Chris. Now let me get to work taking out (or changing), what isn’t a pure observation.

This is a section of Laurelhurst Park. Can you see it in this observation?

Place mixed with people mixed with an overheard conversation: Laurelhurst park a couple [describe. Tall? Short? Thin? Thick?. They each had a dog on leash [describe dogs, breed, size etc] the man wanted to be heard as he felt both inspired and on one of the “waxing” rolls .[Sound, pitch, rise, fall, inflection? What is actually heard in the voice to come to the conclusion?] project and annunciate, throwing your voice as if you are on stage and speaking to the nosebleeds

This is a couple, holding hands, walking two dogs in Laurelhurst park. Can you see these people/dogs in this observation?

bubble of intimacy and privacy. He kept his volume up so as to be heard she was quick and so quiet .  they held hands “ I told you who I was. I didn’t lie. I didn’t hold back. I told you my weaknesses and tendencies. You knew what you were getting yourself into.”

“Weather we end up just friends, if I stay here or go, I feel like depending on how it goes will really impact the way you think about men…the way you think about life. That’s the reality.” she says something I can’t make out. He continues: “ I appreciate you saying that, really, because thats not the way I used to think. It’s the same thing, like the emotional work I do, that you do.”

“I concern myself with the influence I can have over others. That if I get caught up in something negative or self destructive, it’s not just me. There are others. The same goes for the other direction. Hey guys. Let’s meditate! Most people will jump in. I was thinking that, yesterday, that if I’m going to get excited about something, even if it’s negative or destructive, I have to be careful not to pull others into it.”

they continue walking side by side, holding hands, a dog a piece on a leash. She stares into the sidewalk while he talks into it. 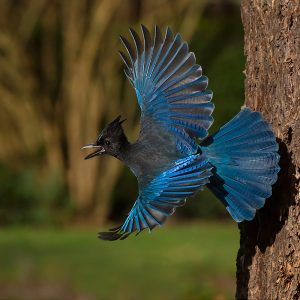 I googled “raucous blue jay,” and got this. Now, how to describe what is seen here?

Location: Raucous [what does raucous look like? Can you be more specific? Is raucous a word you can see? ] jays maraud [same questions] through the campground [the whole camp ground? On the actual dirt? A path? Around a trash can? Can you be more specific?] at dawn [what part of dawn? Pre light? What color is light? What is the texture of that light?] Whack-whack-whack! the silhouettes of towering [has the term towering ever been used with a tree before? Is there a fresh way to see tall trees?] Doug Fir [what makes it a Doug fir? What is unique about this type of tree?] trees [do trees ever do anything but remain still and quiet? They are trees. Can you see them more clearly].  A halo opening through the fringe of branches reveals a patch of steel blue sky. One star glistens through the canopy. A three-quarter moon hangs above, as if caught on a branch. the smell [what is in that smell? Ash? Bitter?] of a burned out camp fire.

Person: Bennie is small but looks strong, with well defined muscles outlining her lean arms and legs. Her green zip pullover falls flat against her chest. The skin on her face, arms and legs is freckled and mottled with white blotches Her shoulder length gray-brown silky [what makes it silky? Have the words silky and hair ever been paired together before? Can there be a different word or a closer observation? Look at this example of describing hair from Graham Greene’s The End of the Affair, “…the brown, indeterminate-colored hair like a pool of liquor on the parquet…” Now that’s seeing in a new way!]  hair falls along the contour of her round head. Deep lines run down the corners of her mouth. Her right eyelid sags a quarter of the way over her eye. She sits on the ground looking straight ahead, knees bent and upright, arms folded with one elbow resting on each knee. 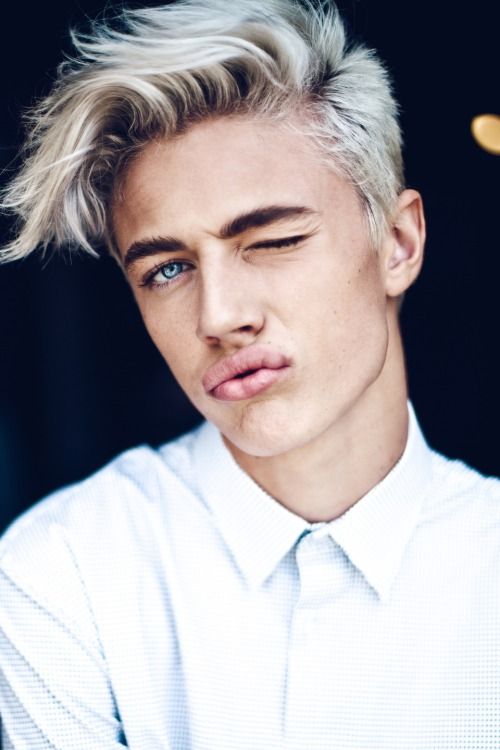 I googled “White haired man with an easy confident smile,” and this is what popped up! I’m sure this is not the guy.

Person: .  He was older.  His wide inviting smile unassuming yet confident [these are judgement, how can you see, and actually describe smile based on what you see?].  His eyes which engaged you in a non-threatening way [Same point/question]. His posture was as before in an easy “Everything will work out” manner.[Same point/question]

His hair was now white.  His eyes and his smile now had wrinkles surrounding. He was now thinner.Behind his familiar smile was this faint hint of regret.  He was still easy and confident, but behind this was still the hint of regret.  It was not bitter or remorseful

Teacher notes: I like all of these, I do, but they are straying out of observation and into story telling!  I know it’s hard, that’s why I gave you the exercise. You guys can do it! Keep going, keep seeing, keep separating your judgements and your desire to tell a story from the world you witness.

See you in Sept.